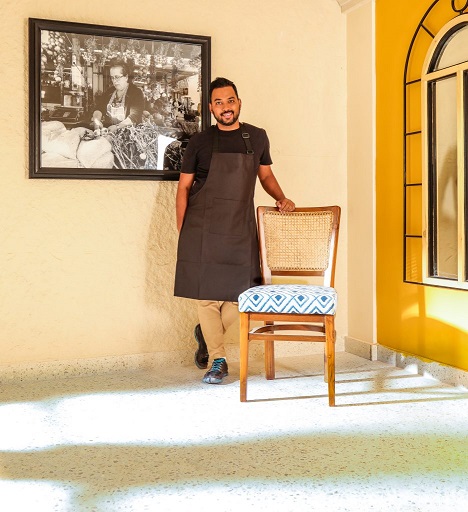 Born and raised in Bombay, Chef Gracians’ family would spend nearly every summer with his grandparents in Tivim, Goa. Early memories of his jovial Goan family’s mouth watering traditional meals and the enjoyable chaos around the kitchen inspired him to become a chef.

Chef Gracian de Souza has 19 years of work experience in India and the UK, predominately trained in modern European Cuisine. Starting his career as a management trainee for 3 years at the Renaissance Marriott, Powai- Mumbai in 2002, Gracian was given a traditional yet solid foundation. As every good Goan chef did at the time, he went on to join the Royal Caribbean cruise liner as a line cook and sailed the transatlantic to Europe from Galveston, Texas. He coincidently dry-docked in Setubal, Portugal where his ancestral lineage happened to come from. This planted the seed of curiosity around his roots further. Gracian came back to Mumbai after a year and joined the Intercontinental at Marine Drive for 3 years. Chef Gracian was instrumental towards the opening of Dome & the Italian Restaurant, Corleone. Hungry to broaden his horizons outside India once again, Chef Gracian moved to London where he worked at the acclaimed hotel The Landmark & restaurant Harvey Nichols working his way up the line for 4 years. London expanded his awareness and palate to a global world of international cuisine and cooking techniques.

On returning back to India Chef De souza joined the Swedish design hotel Svenska as Executive Chef, preopening and running their F&B which included restaurants Mesa, Miro as well as their banquets and in-room dinning. He then moved on to work with Impresario for 2 years heading their stand-alone restaurant, The Tasting Room.

Gracian’s keen Interest in the restaurant business ultimately lead him to diversify as a freelance consultant chef, starting at Speciality Restaurants as consultant chef for their European division followed by a stream of over 30 bistros, bars, cafes, restaurants and QSRs all just in a span of 4 years. Apart from his expertise as a chef, Gracian gives insightful strategic advice and turnkey solutions to his clients. Gracian is an extremely timely and result driven worker making him a natural leader and entrepreneur.

Consistently attached to his ancestral roots, he founded a Goan-Portuguese restaurant called Porto & Poie in Juhu, Mumbai that served traditional dishes cooked with modern finesse, inspired from his childhood memories, family recipes and his travels through Portugal.

Gracian’s food philosophy is rooted deeply in using fresh and local produce as much as possible, stressing on quality & consistency. Although excellent in European cuisine, you can’t take Goa away from the Goan when it comes to emphasis on flavour and simplicity that reflects in his general style of cooking. He delivers food from the heart, with pragmatic processes.